The OUTCRY ENSEMBLE is a youthful and vibrant member of the UK’s orchestral scene, producing concerts of a professional standard for a highly appreciative, diverse, and growing audience. The ensemble pushes the envelope for what young musicians achieve in performance, and its ambitious programming inspires and develops leading national and international musicians.

This spring, Outcry is returning to St John’s Smith Square. We are very excited to be performing a festival celebrating the masterpieces that are Brahms’s Symphonies and Concertos.

This Brahms Symphony cycle will be performed over two weeks and soloists will be taken from within the orchestra. This follows on from the fantastic success of the Beethoven 251 series and the Brahms Requiem last October.

Symphonies no. 1, Piano Concerto No. 1 with Chris Hopkins

Symphonies no.3, Piano Concerto No. 2 with Rick Uttley

Symphonies no. 4, Double Concerto with Oscar Perks and Leo Melvin

Tickets can be bought HERE

Tickets to all 4 concerts automatically receive a 15% discount.

Following on from the success of our Beethoven 251 festival, and in particular our collaboration with The Academy of English voices, Outcry returned to St John’s Smith Square this Autumn. In October 2022, to a sell out audience and standing ovations, Outcry performed Ein deutsches Requiem by Brahms as well as his Tragic Overture and the Alto Rhapsody. We were joined by three fantastic soloists, Anita Watson, Dominic Sedgwick and Marta Fontanals-Simmonds.

In the summer of 2021, Outcry held a summer music festival: Beethoven 251 – A festival of Symphonies in aid of freelance musicians and performing Beethoven Symphonies 1-8 in a week. We completed that cycle with the 9th Symphony and Beethoven’s Coriolan Overture, Cantata for the Death of Joseph II on November 6th 2021 at St John’s Smith Square.

Following the overwhelming success of this festival,

Brahms – Rhapsody for Alto and Orchestra

Outcry is looking to expand and do more in 2023. This concert will act as a launch event for our 2023 season in which we hope to produce another festival and much more. We are always looking for supporters and to expand our regular audience. If you would like to be involved, or to be in contact in anyway, please don’t hesitate to write to: 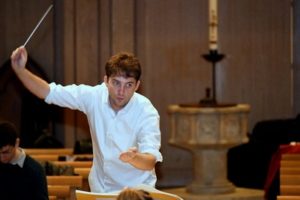 Founded in 2009 by James Henshaw with the aim to support and nurture young performers, Outcry gives new talent, often emerging from conservatoires, the opportunity to work in a professional yet nurturing environment, helping them to embark on their careers. The orchestra specialises in delivering high-level performances with a wide range of programming incorporating symphonic repertoire, world premières from young composers, curated and bespoke concert series and festivals, and large choral works. Over the last decade the ensemble has grown ambitiously yet sustainably, through the patronage and professional governance of its Trustees: Sir Richard Aikens, Richard Humphreys, Lindsay Henshaw, Lisa Erickson, Paul Ashley, Peter O’Connor and Gavin Millar QC.

Outcry has made appearances across the UK with recent notable venues including Temple Church, Tate Modern, and St Mary Abbots; the orchestra has also toured Europe. The ensemble’s recent festival Beethoven 251 played to sold out audiences and standing ovations, raising over £40,000 for freelance musicians and their development. Outcry has developed a strong relationship with section principals, collaborating with them frequently on solo work and concertos, which helps to create a distinctive sound, character, and identity for the orchestra. Since its inception, dozens of musicians have used Outcry as a platform to careers in professional orchestras, including principal positions in the BBC symphony, LSO, LPO, Royal Opera House and English National Opera and leader of Royal Scottish National Orchestra.

Outcry is renowned for a pioneering approach to programming and performs either a world premiere or a work by a living composer at many of its concerts. They approach modern music with the mixture of passion and rigour that you’d typically expect to experience in performances of mainstream repertoire, and apply the explorative-analytical approach normally found in contemporary music to their performances of the ‘standard’ repertoire.