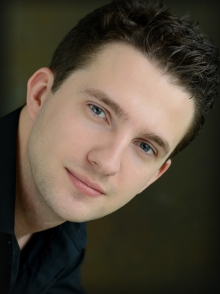 Born in London, James read Music at Clare College, Cambridge, where he was a choral scholar and award winner as both conductor and pianist.

Having graduated with a Distinction in Repetiteuring from the Guildhall School of Music and Drama, he assisted Mark Wigglesworth at the Aldeburgh Music Festival on Owen Wingrave, with a cast including Susan Bullock, Janis Kelly, Richard Berkeley-Steele, Ross Ramgobin and Jonathan Summers. He also assisted Mark Wigglesworth at the Proms with the BBC National Orchestra of Wales and worked with Ivor Bolton on Monteverdi’s Orfeo as Chorus Master at the Bayerischer Staatsoper in Summer 2014. He is the Music Director of Ashtead Choral Society.

Music Director James Henshaw who founded the orchestra in 2010, is Chorus Master of the English National Opera chorus. During his tenure, the ENO chorus has won both an Olivier Award for ‘Outstanding Achievement in Opera’ and ‘Best Chorus’ at the International Opera Awards, both in 2016.

Aside from his work with the ENO chorus, James’ conducting credits include La Bohème for English Touring Opera, Monteverdi’s Orfeo at the Bayerische Staatsoper as Chorus Master alongside Ivor Bolton and Assistant Conductor to Mark Wigglesworth on titles including Owen Wingrave and Jenufa, for English National Opera and the Aldeburgh Festival and A Child of Our Time at the BBC Proms. He will be conducting The Magic Flute at Longborough Opera Festival (https://lfo.org.uk/opera/the-magic-flute) on July 16th this year. James founded and runs  the Outcry Ensemble.

The position of concertmaster is shared between Emily Davis and Oscar Perks. Emily is currently the Associate Concertmaster of the Bergen Philharmonic Orchestra having been appointed to the position by Edward Gardner in June 2016, and was formerly a member of the City of Birmingham Symphony Orchestra, while leading the European Union Youth Orchestra. Oscar recently joined the renowned Dante Quartet as second violinist, and teaches violin at the Yehudi Menuhin School.