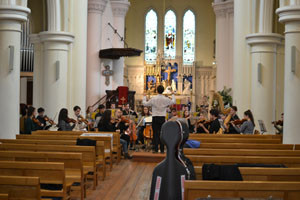 Our charitable aims are to support the young musicians and composers of London, giving them a platform on which to showcase their talents.

Outcry is fortunate to have a generous and supportive board of Trustees. They are:

Richard has spent all his working life in media gradually progressing from operational roles to financial and corporate management. After a short period acting and writing for theatre and television he worked in the Advertising Industry notably as President/CEO of Saatchi & Saatchi Advertising Worldwide and then as Founder/President of Adcom Investors, owner of a leading US advertising, new media and sports marketing group of companies.

Richard has advised some of the World’s leading media companies on Mergers and Acquisitions and has worked with television broadcasters in Russia, Japan, the US and Mexico. He is a founding shareholder and Chair of the leading listed AdTech company in South East Asia and has represented institutional investors as Chair of  several UK companies.

James Henshaw is an international Opera, Orchestral and Choral conductor based in Berlin. He studied music at Clare College, Cambridge and then Guildhall School of Music and Drama. He has worked for a number of UK opera companies including: Scottish Opera, Longborough Festival Opera, Garsington and most recently, Glyndebourne. He was Chorusmaster at English National Opera for three and a half years during which time he conducted a number of productions and his work was in some way nominated for two Olivier Awards. For more information about his conducting, please visit www.jameshenshaw.co.uk

Sir Richard Aikens was a barrister, QC, judge and then Appeal Court judge until 2015. Since then he has worked as an international arbitrator, visiting professor (at King’s London and QMUL) and as legal author. He was a director of English National Opera 1995-2004, founder member, chairman and now President of the Temple Music Foundation 2003 to date, is chairman of Music and Theatre For All (2017 to date) and is a trustee of the Razumovsky Ensemble and Academy, another musical charity. He lives in central London, has a house in the French Basque country and enjoys cycling as well as music.

Lindsay Henshaw is a barrister and an Associate Fellow at the Saïd Business School, University of Oxford. Until her very recent retirement, Lindsay participated in the Commercial Leadership course, an element of the MSc in Major Programme Management. She also participated in the Commercial Management course for the UK Government’s Major Project Leadership Academy. Lindsay read law at the University of Cambridge and is a member of Lincoln’s Inn.